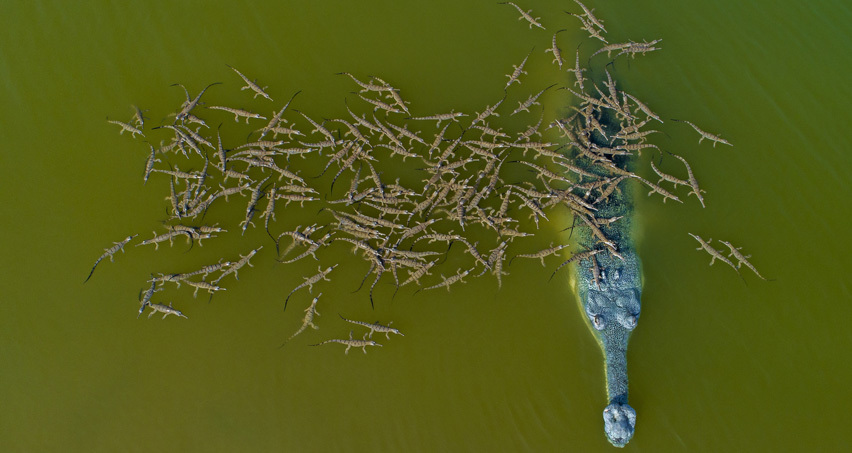 bioGraphic: Basking on the Brink

Dead gharials began washing up on the banks of India’s Chambal River in December 2007. Over the following weeks, the body count grew. By mid-January, the dead reptiles—some the length of two tall men, lined up end to end—numbered in the dozens. By March, more than 110 of the skinny-snouted creatures had been found dead, most along a 30-kilometer (18-mile) stretch of river.

At the time, there were thought to be just 200 to 250 breeding-age gharials (Gavialis gangeticus) left in the world. And while only a dozen or so of the victims had reached reproductive age, many were close. A loss of more than 100 of them represented a major blow for a population already in crisis. Having been classified by the International Union for Conservation of Nature (IUCN) as critically endangered even before the die-off began, the species was clearly in trouble—including here on the Chambal, its last remaining stronghold.

Among the international team of veterinarians and crocodile experts that convened to investigate was Jeffrey Lang, a conservation biologist previously at the University of North Dakota. When Lang traveled to India that March, he was concerned about the die-off. But he was also driven by what he saw as a window of opportunity, opened by the crisis, to take a closer look at an understudied species. What he found were questions, loads of them – not just about what was killing gharials, but about how the animals lived in the first place.

“We opened a Pandora’s box. There was all this stuff we didn’t know,” says Lang, now a scientific advisor for the Madras Crocodile Bank Trust and the Gharial Conservation Alliance. To help fill the many knowledge gaps surrounding these imperiled creatures, Lang – along with conservationist Rom Whitaker and croc researcher Dhruvajyoti Basu – launched a research project on the Chambal that would reveal many new details about basic gharial natural history and ecology, from their movements and breeding behaviors to the many threats they face over the course of their lives.

Even as the mystery lingered over the 2008 die-off, study results began to provide clues about how best to protect the gharial – both from the potential for similar catastrophes and from the growing pressure of development that threatens the species’ very existence.

See the rest of the story here.

This story was also picked up by Discover.