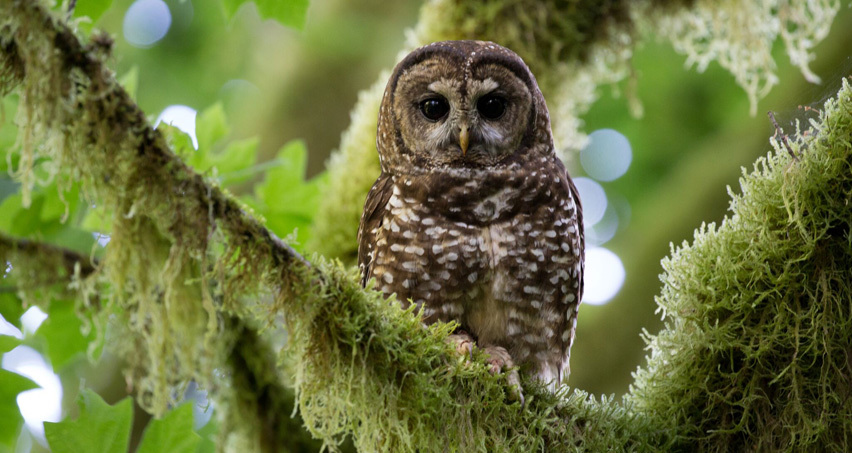 On a hot, still afternoon in early June, Chris McCafferty stepped off an
overgrown forest road and plunged into the dense, moss-covered woods of
Oregon’s Coast Range. Wearing jeans, suspenders and a backpack loaded
with live mice, the shaggy-haired biologist traversed a steep slope,
stepping over fallen branches and past thorny salmonberry bushes. There
were no trails to guide the way, but McCafferty moved quickly on
familiar, if precarious, terrain. Over the past 24 years, the
46-year-old has spent many days and many nights monitoring the region’s
northern spotted owls (Strix occidentalis)—a wise-eyed puffball of a top predator that is also a longstanding icon of the Pacific Northwest’s ancient forests.

When McCafferty started studying spotted owls, first for the U.S. Forest
Service and then as a biologist at Oregon State University in
Corvallis, the round-bellied birds, which stand about a foot-and-a-half
high, appeared wherever there was habitat that would support them:
mostly vast and undisturbed groves stocked with centuries-old trees. As
time went on, though, their populations plummeted. Meanwhile, numbers of
barred owls (Strix varia)—a species that is slightly larger, and
striped rather than speckled—quickly soared. Today, with enough
evidence to link those trends, it’s clear that barred owls are pushing
spotted owls out of their already shrunken territories—and possibly
toward extinction. To prevent that from happening, the U.S. Fish and
Wildlife Service has launched an experiment to test an unsettling
management strategy: killing one type of owl to save another.

After nearly a decade of planning, the first large-scale, federally funded
experiment to save spotted owls by killing barred owls is ramping up in
four study sites from California to Washington. One of those sites is in
Oregon’s Coast Range, where McCafferty’s trek in early June came on the
heels of one of the experiment’s first major pushes. Last winter,
United States Geological Survey biologist David Wiens and his team
killed 244 barred owls in the area, where the spotted owl population has
shrunk from 110 territorial pairs in the early 90s to 14 today.

With a plan that could end up killing thousands of barred owls in all
four sites over the next few years, the experiment is the latest
development in a series of owl wars that have persisted for decades. As
bodies pile up, the plan is refueling the flames, highlighting the
often-absurd decisions humans make about which animals matter most, and
inviting new scrutiny of the god-like role we assume in deciding what
should stay and what should go on a changing planet.