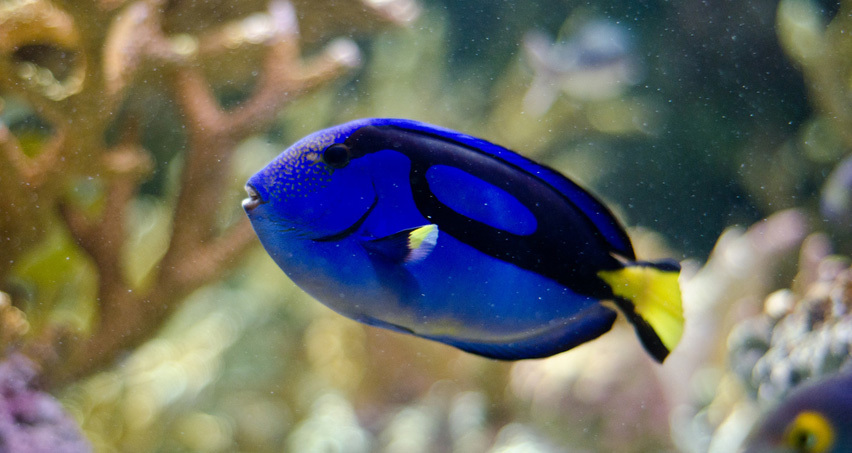 Eric Cassiano walked into a windowless room at the University of
Florida’s Ruskin campus on a humid spring morning in 2014. A few
kilometers away, anchored sailboats bobbed in the marinas of Tampa Bay.
Inside the Tropical Aquaculture Laboratory (TAL), the biologist’s
destination was a much smaller body of salt water: a 210-liter tank
filled with flea-sized baby fish struggling to survive—the latest
attempt to conquer what had become equal parts scientific puzzle,
conservation quest, and race against Disney.

The goal of the experiment was simple: to raise in a lab, for the
first time, Pacific blue tangs from freshly laid eggs to fully formed
iconic reef fish. But success had been elusive. And after dozens of
failed attempts over many months to raise the oval-shaped,
yellow-streaked blue fish, pressure was now mounting from an unexpected
source: Hollywood. Next month, Walt Disney Pictures will release the
Pixar-produced film Finding Dory, starring the chatty and forgetful blue tang who played a supporting role in Finding Nemo, the 2003 animated hit about a young clownfish.

After Nemo hit the big screen, sales of orange and white striped
clownfish rose by as much as 40 percent, according to some estimates.
Conveniently, clownfish are simple to breed in captivity, and demand was
easy to satisfy. When a similar rush for pet Dorys inevitably follows
the new film, fragile coral reef environments are likely to suffer.
That’s because even though Dory was a model of resilience and optimism
in her perilous quest to rescue Nemo from a dentist’s office fish tank,
young blue tangs have proven much less hardy inside lab tanks. As Dory
graduates from sidekick to leading lady, the lack of a captive-bred
option will drive collectors to source more blue tangs from the wild—a
harvest that’s often unregulated and destructive.

Dory was, as usual, in the back of Cassiano’s mind when he arrived at
work that spring day. And he was eager to check on the not-yet-fish,
which were defying expectations. Two weeks earlier, 4,000 eggs had
hatched into nearly invisible larvae inside a cylindrical tub big enough
to fit several toddlers. And while most previous trials had ended
around day six, these fishlets lived on. When the larvae surpassed
another typical crunch point at 11 days, Cassiano wondered if they would
finally make it. “You try not to get too excited because there’s a lot
of disappointment,” he says. “But it was awesome.”

Then came the beginning of the end. Cassiano noticed that the larvae
looked pinheaded, which meant they weren’t eating. Some were swimming in
tight little circles, also a sign of demise. On day 17, a photograph
taken of one member of the batch captured a mostly translucent,
two-millimeter-long body with a splotch of yellow beneath a ghostly blue
eye: a fish in a state of becoming. By day 20, all were dead—another
setback on a long road with a now imminent deadline.

“When Finding Dory comes out, my personal opinion is that
people won’t be able to buy enough [blue tangs],” Cassiano says. “That
leads down the dark path of how we are going to get more of them. And
that could be a problem.”