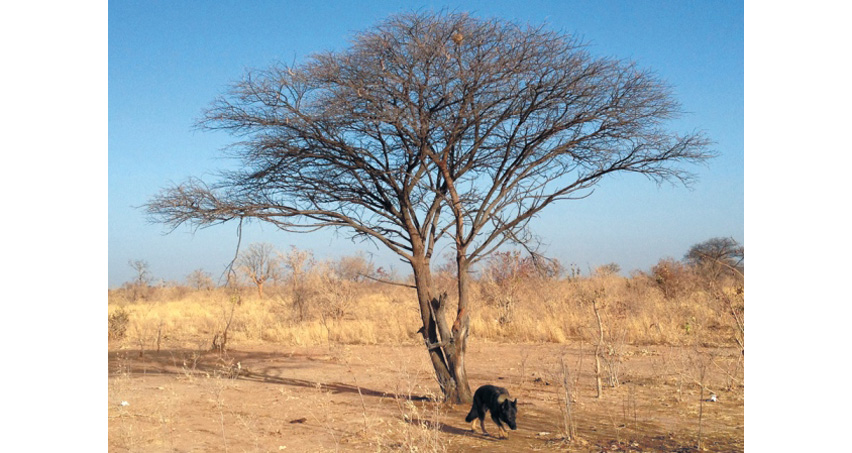 The armed guards at Mali's Bamako Senou International Airport had never seen a German shepherd before. The only dogs they were familiar with were the small, scrappy mixed breeds that are common in West Africa. So when Dana, a wolf-like purebred from California, stepped off a plane and into the airport in February 2012, eight soldiers surrounded her and her trainer Sapir Weiss, guns raised.

Weiss, who once trained antiterrorism dogs for the Israeli army, was eager to get Dana outside after 36 hours of bladder-straining international travel that included a seven-hour stopover in Paris. But the soldiers thought the dog's service vest was a suicide bomb. They ordered Weiss to take it off. They demanded to know where Dana's crate was. "Where's the box?" they yelled. "Where's the box?"

To the guards, and most people in Mali, it was inconceivable that a dog could be trained to travel in economy without a crate. Equally improbable was what Dana had come to Mali to do: sniff out mosquitoes to help eradicate malaria.

Dana is part of an ongoing effort to solve a perplexing mystery. Every year, a swathe of the African Sahel region from Senegal to Sudan experiences an extreme dry season that lasts for up to eight months. As surface waters disappear, mosquitoes can no longer reproduce because their eggs and larvae must remain wet to survive. The number of mosquitoes buzzing around crashes to near zero.

But when the rains come, adult bloodsuckers appear in explosive numbers in as little as three days — a timeline that is hard to square with the fact that it takes at least eight days for these mosquitoes to grow from egg to adult.

The pattern suggests that adult mosquitoes hide somewhere to wait out the dry season, and that possibility points to a tantalizing plan of attack. Every year, malaria makes hundreds of millions of people ill and kills more than half a million, mostly children in Africa. If scientists could figure out where the mosquitoes go when conditions become inhospitable during dry seasons, they might be able to wipe out the insects — and with them the disease they carry — at a point when they are likely to be easy targets.

For decades, the hunt for mosquito hideouts has both enticed and plagued scientists, who have run up against a long list of frustrations. Among those refusing to give up is Tovi Lehmann, a research entomologist at the US National Institute of Health's Laboratory of Malaria and Vector Research in Rockville, Maryland, who, along with dozens of team members in both the United States and Africa, has spent six years and about US$700,000 trying to find the elusive insects with every method he can think of, including dogs such as Dana.

The potential pay-off is worth the massive effort, he says. "You could imagine visiting villages for less than half a day, targeting those putative sites and basically cutting malaria transmission to the point where it would be trivial."