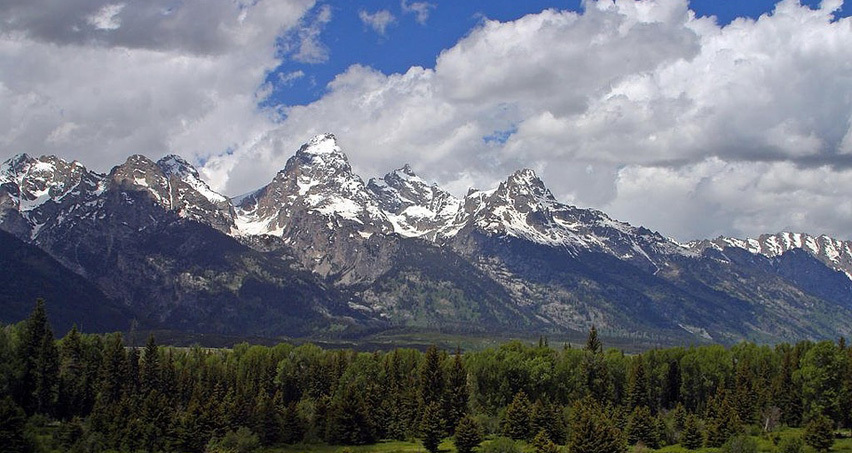 When my husband Gabe suggested that we climb the Grand Teton to celebrate our 10th anniversary, I said I’d think about it. Then I locked myself in the bathroom and googled: “Will I die climbing the Grand?”

I found plenty of fuel to flame my fears: At 13,775 feet, the iconic peak looks like a wave cresting over the ski town of Jackson Hole, 7,000 feet below. It’s the tallest in western Wyoming’s glacier-specked Teton Range, and has long been considered a classic climb for mountaineers.

But like any other serious mountain, the Grand has also witnessed tragedy, including last summer’s death of a mountain guide who fell while trying to dislodge a piece of equipment from a rappelling station.

I’d been wary of taking risks in the wilderness since losing a close friend to a climbing accident a few years ago. And then there were our two young boys, who would stay home in Minneapolis while we attempted the summit. What if we both failed to return?

Gabe’s proposal that we take the trip was full of symbolism after a decade of marriage that began with a chance meeting in a rock climbing gym. With our shared love for travel and the outdoors, the early years of our relationship included trips to California, Nevada, Mexico and Madagascar.

Then came kids and with them, less free time along with a feeling that we had more to lose. We kept traveling to mountains with babies in backpacks. But relying on ropes to protect our lives now seemed more foolish than fun.

Climbing the Grand without the boys, who were now 8 and 3, made perfect sense as a way to re-tap the adventurousness that brought us together. It also struck me as a terrible idea. Still, I knew I would say yes. The alternative was to risk rejecting the foundation of our vows.

A few weeks later, on a Friday morning in mid-September, we drove into the parking lot of the Lupine Meadows Trailhead at 6,700 feet in Grand Teton National Park. There, we found Noah Ronczk­owski, the ruddy-cheeked mountain guide we had hired through Jackson Hole Mountain Guides, one of two Jackson-based guide companies.

Using a guide wasn’t our typical style. But enlisting his help felt like the responsible thing to do. “It’s in their interest to not let us die,” Gabe reminded me frequently.

Stop at base camp

Some people climb the Grand in a day, beginning in the middle of the night. We chose a more luxurious itinerary that started with a seven-mile hike to the guide company’s base camp at 11,000 feet. A tent equipped with sleeping pads and bags awaited us.

After a dinner of frozen lasagna, steamed by a cheerful Noah in the camp’s bus-sized kitchen tent, we tried to get some sleep. The night didn’t last long. At 3:30 a.m., we awoke to the sound of a beeping watch and a high-alpine wind whipping the tent’s rain fly.

I lay there for a minute, reluctant to leave my warm sleeping bag, contemplating the task ahead: a 2.7-mile, near-vertical ascent that would require multiple pitches of roped climbing, starting in the dark. Thinking wouldn’t get me to the top. So I piled on layers and stumbled to the food tent for bagels and coffee.

By 4:30 a.m., with headlamps fixed to our helmets and temperatures near freezing, we worked our way down a boulder field to a trail that immediately began its relentless path upward. Soon came our first roped climb up an 80-foot cliff. Noah set a belay. Gabe and I followed on the other end of the rope, tied in just a few feet from each other.

“That was my first pitch ever climbing in the dark,” I said when I got to the top of the pitch. Noah turned my words into a song that made me laugh. First fear conquered. And the sun wasn’t even up yet.

Another half-hour of hiking led us to another base camp set by Exum Mountain Guides, the other guide company in town. Beyond the glow of our headlamps, a pink haze finally began to outline the mountains against a flaming sky.

Up ahead, Noah pointed to a stretch of rock called Wall Street, where the true climbing would begin with an infamous move called “the step-across.” Over thousands of feet of empty air, the maneuver requires a three-step traverse from one ledge to another.

I found a handhold and, looking down as little as possible, took the first step. Gabe was right at my hip, cheering me on. We were on belay together, but I didn’t want to test the system with a fall.

When we reached firm footing, I was flooded with a mix of relief and euphoria that propelled me up the rest of the Upper Exum Ridge, a classic route that alternates between steep scrambling and near-vertical climbing. With our climbing history, the physical moves were never too difficult. But the exposure added plenty of excitement.

At 10:30 a.m., six hours after we’d started the day, we stepped onto the summit and celebrated — with snacks, photos and a call home to the kids. (Yes, there is cell reception on top of the Grand.)

“Did you climb the mountain?” asked 3-year old Ben. We did it, we told him. And someday, we’d do it again — with him.